There is no official number for war brides who married Canadian soldiers during the First World War but it is estimated that 54,000 relatives and dependants accompanied troops who returned to Canada following demobilization. By the end of March 1948, the Canadian government had transported approximately 44,000 Second World War wives and 21,000 children to Canada. It was interesting to note that the first marriage of a Canadian serviceman to an Englishwoman occurred only 43 days after the first Canadians arrived in England in November 1939.

The war brides were well taken care of from the beginning to the end of their voyage. The Canadian Wives Bureau arranged passage for the women and delivered them to the transporting ships. Once aboard the ship, the women and children were under the care of the Army Conducting Staff that consisted of the Royal Canadian Army Service Corps, doctors, nurses and Voluntary Aid Detachments of which the Red Cross was an important component. Upon arrival in Canada, the women who were scheduled to travel beyond Nova Scotia continued their journey by train, still escorted by the Red Cross.

Canada proved to be a culture shock for many of the young women, especially the brides from large cities who suddenly found themselves in rustic farmhouses without the modern conveniences that they were used to such as running water and indoor plumbing. In spite of the many hardships, the new families preserved to build productive lives and communities.

Margaret “Maggie” Beatrice (Hague) Robideau – WWI War Bride
Margaret was born on June 19, 1902 in
Kirkdale, Liverpool, England – the
daughter of a marine, Alfred Hague.
She met a young soldier from
Bezanson by the name of Private Roy
Robideau who was stationed at the
Canadian General Hospital in Kirkdale,
Liverpool. After a short courtship, they married at St. Mary’s Church on July 19, 1919 and embarked for Canada the following October. Once they arrived in Grande Prairie by train, they headed to the Bezanson area by horse & stoneboat – a trip that took three days. They lived with Mr. and Mrs. Willis and Roy’s parents until they were able to move to their
homestead, SE 12-72-3-W6, in 1921. Here they raised a family of four boys; Peter, Alfred, Leo, Ernie and one girl, Amelia. Roy later filed a homestead application on another ¼ section where he broke a few acres and then subsequently sold it to Fred Sedore for a bottle of whiskey and a box of chocolates. Although the family lived very humbly, they were happy in spite of the hard times during the depression. In 1929, wheat was 29 cents a bushel; however, it cost 10 cents a bushel to thresh the crop. Some wheat would be hauled to the flour mill in Sexsmith to be ground into flour. The flour mill kept ½ of the wheat for grinding costs. In 1930, pigs were sold for $3 each. Maggie recalled the years of milking cows, helping in the fields, cooking, cleaning and raising the children, kept everyone busy. Wood had to be cut, split and stock piled for the long cold winters. They melted snow in the winter and hauled ice from the Smoky River which was packed in sawdust to keep it from
melting for the summer water supply.

In 1952, Maggie and Roy retired and built a lumber home on their son, Alf’s farm near Highway 43, RR 31. In 1969, they celebrated their 50th wedding anniversary with a lawn party by their home with all their family and many neighbors in attendance. The Robideau’s loved company and Maggie always had the tea pot ready along with a dessert of some kind. One of Maggie’s most treasured keepsakes was a “scroll” from Queen Elizabeth that congratulated her on her 100th birthday. The family had a celebration for her at the Bezanson Seniors’ Centre with all her family and friends being invited. Maggie lived in her little house on the corner of RR31 and Highway 43 until 2003 when she fell and broke her back. She was then placed in the Grande Prairie Long-term Care Centre where she resided
until she passed away in 2006. Maggie had over 165 descendents continuing down to the sixth generation. Roy had passed away in 1984. Both were buried in the Glen Leslie Cemetery.

Grace Veronica (Taylor) Nellis – WWII War Bride Grace, born on January 13, 1920 at Walton-on-the- Hill, Surrey County, England, was the daughter of the
town’s postmaster, Jim and his wife, Ann Taylor. She had three brothers and one sister. Grace attended school from the age of 5 to 15 after which she found employment as a typist for the ‘News of the World’ – which was the elitist newspaper in England during the war years. Grace was 19 when WWII commenced and she went to work in a factory doing precision work for the war service. Quite often she went to work only to return home during an Air Raid Alert. As well, she had many horrendous experiences as German missiles called “doodlebugs” were launched and landed nearby.

The small town hosted many dances; some of which were attended by servicemen who were stationed nearby. It was at one of these dances that Grace met a soldier by the name of Private Harry Nellis. After a short courtship, the young couple married in the local Church on August 28, 1945 with all of Grace’s family in attendance. As well, two of Harry’s cousins were able to obtain “leave” and attended the wedding. As everything was still being rationed, the small wedding reception was held at the Taylor residence. After all the company left, Harry and Grace went golfing – one of Grace’s favorite sports.

Once the war was over, Harry embarked for Canada in October 1945. Grace later sailed on the Aquitania, arrived in Canada and traveled by train to reach Edmonton on July 4, 1946 where she was met by Harry. As it had rained for days, the trip to Bezanson was Grace’s first encounter with muddy roads. The day the young couple arrived at the Nellis farm happened to be the day of the Bezanson Stampede. Word soon spread that Harry was home with his new bride and many friends and relatives left the stampede and congregated at the Nellis home. Grace was a bit overwhelmed by the large “Nellis Clan” and it seemed that family and friends would stop by unannounced at any time. In Grace’s hometown, it was customary for someone to send a note that they would be coming to visit in a day or two. Grace and Harry stayed with his parents until Harry found employment at Moon’s Mill. As the Mill provided living quarters, Grace and Harry both lived there until 1950 when they decided to purchase their own farm in Bezanson, NE 2-72-3-W6. They raised a family of three sons; Leslie, Lawrence and Edward. There were many things Grace had to adjust to; lack of running water, out-houses, cooking on a wood stove, heating the iron on the stove – just to name few. There were many days that Harry would find his new bride in tears and on one particular occasion, Harry, being exasperated by the situation, offered to send her back to England.

In the mid-70’s, they sold the farm to their oldest son, Les, and moved to Grande Prairie to retire. They spent their days curling and golfing and in later years they enjoyed watching the many sporting activities that their grandchildren were involved in. Harry passed away on May 9, 2005 and Grace on December 3, 2009. Both were buried at the Glen Leslie Cemetery. In spite of all the adjustments, Grace relished in the beauty of the area, the joy of meeting all the new relatives, the atmosphere associated with being a member of a large family and last but not least, and in Grace’s words “the best part of being in Canada was being with my husband”. 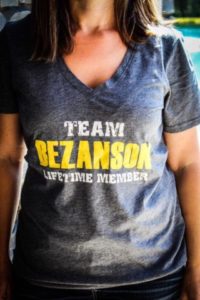 See some of the spirit wear we have for purchase. Visit the Knelsen Centre to get yours today!